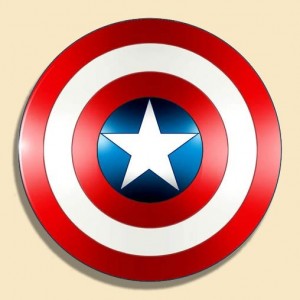 Captain America, that red, white, and blue Sentinel of Liberty first appeared back in March, 1941 in Captain America Comics #1 from Timely Comics. Created by legendary comic book artists Joe Simon and Jack Kirby, the character was designed as a patriotic super-soldier fighting the Axis powers of World War II.

With 75 years of comics (minus a few years pause, here and there) bearing Captain America’s iconic image, the number of celebrated comic artists who have drawn the character is extensive. The list of those who drew him during the Golden Age, the WWII years, is relatively short, however, and, of their number, only one survives today: Allen Bellman.

Allen Bellman worked for Timely Comics during WWII, alongside other legendary artists as the aforementioned Jack Kirby and Stan Lee, drawing books for The Human Torch, Sub-Mariner, Captain America, and many other classic superheroes.

Excitingly, Allen will be the guest of honor at the celebration of Captain America’s 75th Anniversary at the Hall of Heroes Superhero Museum in Elkhart, Indiana on May 14th, 2016. He’ll be there to sign autographs and talk about his days drawing Captain America during the Golden Age.

Other attractions will include Captain America’s Shield used by Chris Evans in the 2011 film “Captain America: The First Avenger,” and the 1965 Kirkham Shelby Cobra sports car featured in both the 2008 “Iron Man” film featuring Robert Downey Jr. and the reality TV series “Fast N’ Loud.”

There will be a Marvel Cosplay contest and Comic and Toy Show as well – not to mention all the great comic and superhero related items you’ll always find at the always entertaining Hall of Heroes Superhero Museum in Elkhart, Indiana.

Hall of Heroes Lodging
Just 30 minutes from the Hall of Heroes Superhero Museum in Elkhart, Scottish Bed & Breakfast is the perfect home base for any of your Northern Indiana Amish Country adventures, with luxurious amenities, spacious lodging, and delicious breakfasts will show you why. Book your stay now and start planning your 2016 Amish Country getaway!

This entry was posted on Monday, May 2nd, 2016 at 10:00 am and is filed under Adventures in Northern Indiana. You can follow any responses to this entry through the RSS 2.0 feed. Both comments and pings are currently closed.