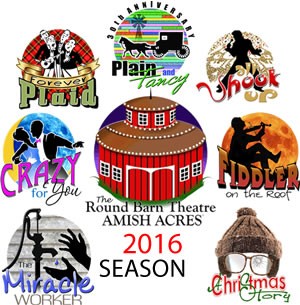 Amish Acres recently announced the Round Barn Theatre 2016 Season, titled “New To Me,” and it’s loaded with classics and favorites sure to delight and entertain everyone!

Forever Plaid
April 13 – May 22, 2016
What happens when four music lovers get together to share their love of music? They become Forever Plaid! Filled with nostalgic pop hits of the 1950’s, Forever Plaid is one of the most popular and successful musicals to hit the stage in recent years. Featuring snappy repartee and songs like “Three Coins in a Fountain,” “Sixteen Tons,” “Chain Gang,” and “Heart and Soul,” Forever Plaid will keep your funny-bone tickled and your toes-a tapping!

Plain and Fancy
May 25 – October 15, 2016
What happens when two sophisticated New Yorkers are thrown in with a group of traditional, Pennsylvania Amish? Musical comedy! Plain and Fancy is celebrating its 30th Anniversary on the Joseph Stein Stage during the Round Barn Theatre 2016 Season! In celebration of over 3,000 performances before well over 300,000 spectators, every season ticket holder who comes to any 2016 Plain and Fancy performance will share a piece of Shoofly Pie with the Miller family!

All Shook Up
June 7 – July 17, 2016
You’ll think you’re in the presence of the King of Rock n’ Roll with All Shook Up – a musical fantasy about a guitar-playing roustabout who arrives at a small, quiet town and proceeds to change everything and everyone he meets with such classics as “Heartbreak Hotel,” “Jailhouse Rock,” and “Don’t Be Cruel.”

Crazy for You
July 26 – Aug 28, 2016
Bobby Child is a well-to-do, 1930s playboy, who wants to dance but is being foiled by his controlling mother and fiancee. Will he fold to the pressure of everyday life or go on to achieve his dream? Find out while enjoying such timeless hits as “I Got Rhythm,” “They Can’t Take That Away From Me,” “Embraceable You,” and “Someone To Watch Over Me.”

Fiddler on the Roof
September 6 – October 16, 2016
Fiddler on the Roof is a staple of the musical theater and winner of 9 Tony Awards, features such iconic songs as “Sunrise, Sunset,” “If I Were a Rich Man,” and “Matchmaker, Matchmaker.”

The Miracle Worker
October 19 – November 6, 2016
Winner of 4 Tony Awards, The Miracle Worker is the classic tale of Annie Sullivan and her student, Helen Keller. Blind and deaf almost since birth, Helen is like a wild thing with her family, unable to communicate and utterly alone in a dark and silent world of mystery – until Annie comes along and does her best to reach her mind and spirit.

A Christmas Story, The Musical
November 11 – December 31, 2016
You know the story of little Ralphie Parker and his dream of a Red Ryder air rifle for Christmas – now come see the musical, contaning all the iconic scenes from the film plus a delightfully versatile score featuring such numbers as “Ralphie to the Rescue,” “A Major Award,” “Sticky Situation,” and, of course, “You’ll Shoot Your Eye Out!”

Round Barn Theatre at Amish Acres

1600 W Market St, Nappanee, IN 46550
Get tickets and more info on the Round Barn Theatre 2016 Season online at: www.amishacres.com

Round Barn Theatre Lodging
Amish Acres’ Round Barn Theatre in Nappanee, Indiana is only 10 minutes away from Scottish Bed & Breakfast. Making us your home-base for all your Northern Indiana adventures couldn’t be smarter. Our luxurious amenities, spacious lodging, and delicious breakfasts will show you why. Book your stay at Scottish Bed & Breakfast now!

This entry was posted on Friday, February 5th, 2016 at 10:00 am and is filed under Adventures in Northern Indiana. You can follow any responses to this entry through the RSS 2.0 feed. Both comments and pings are currently closed.